No post for a couple of weeks ….. we’ve been busy painting the kitchen. And part of my mission was to get a straight line in the angle where the ceiling slopes down to the wall. The trick is to use masking tape, and take it off immediately after painting the line so the paint has no chance to bleed underneath. It looks all right, from a few feet away!

While I was doing this (and between wondering why we didn’t just paint the whole thing white), I started pondering what a straight line is, anyway.

In one sense, we all know – it’s that thing you draw with a ruler and pencil for graph axes, triangles and so on. But if your school ruler is anything like mine was, it will get tapped on the edge of the desk, used for sword fighting and flicking paper pellets, wedged into gaps just to see if it will fit… The one thing it won’t have is a straight edge.

This is true of all straight lines we draw in the real world, however careful we are and however well we look after our equipment. At some level, visible or microscopic, they are not straight. They’re just straight enough for whatever it is we want them to do.

We also talk about going straight to somewhere, which usually means we take the most direct route (and don’t stop off for coffee and cake on the way). This makes sense: the shortest distance between two points is a straight line, isn’t it?

Well, yes, it is – on a plane surface (that is, a surface that does not curve in any direction). But that’s not much use to us Earthlings, inhabiting as we do the surface of a sphere (or a spheroid if you want to be pedantic about it). The shortest distance between two points on the surface of a sphere is a segment of a circle whose centre is the centre of the sphere (a Great Circle is the term used in connection with the Earth, even though it is not quite a sphere). This line is, of course, curved and is often referred to as a geodesic – a term more generally used in mathematics to mean the equivalent of a straight line in curved space.

And here’s a thought experiment. Imagine a spherical Earth, then draw a line due south from the north pole until you reach the equator. Turn through 90o and draw a line along the equator until you have gone 90o west. Then turn north again and draw a third line back to the north pole. This will make an angle of 90o with our first line. You’ve just created a triangle with three right angles – 270o! Who says all triangles have 180o? Curved surfaces are different!

If you want to know more about spherical geometry, there’s a lot on the web.  This is a good place to start:

And thinking of curves, if you are fond of calculus you might like to consider a straight line as a curve with zero curvature. In other words, the second derivative – the rate of change of gradient – is zero. And if the gradient is unchanging, the curve…. isn’t curved!

My head hurts. Here are some lines I made yesterday. They’re not straight, and it doesn’t matter in the least. 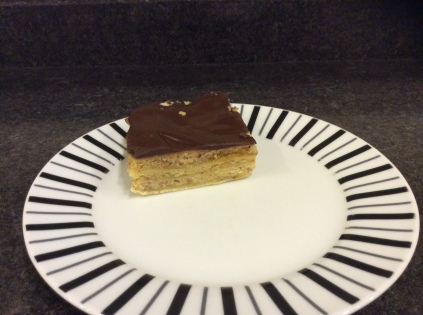